Here’s to beer! RCS enthusiastically wishes our fellow mortals a hearty “Happy International Beer Day”! Today is the day to celebrate beer’s ties to humankind. The holiday, first celebrated in 2008, and every first Friday in August since, was brewed up by a few Suds-Buds living in the beach community of Santa Cruz, California whose goal was to “Bring the world together by celebrating the beers of all nations and cultures on this one remarkable day.” The group of founding friends asserted that the world needed a dedicated day for beer lovers everywhere to raise a toast and rejoice in the greatness of beer and that from Allagash to Żywiec, everything tastes better with beer.

Beer is a natural for limitless flavor varieties, offering endless opportunities in pairings with food. Considering that some of the basic ingredients of beer: barley (sweetness), hops (bitterness), yeast (contributing that distinctive "bready" flavor), as well as spices, nuts, chocolate, fruits, seeds, stems and roots can be combined in myriad combinations, beermakers can be free to experiment with infinite flavor notes.  And while it is unknown what food was served at the first ever keg party, beer’s vast flavor flexibility has a global reach with food pairings.

Although RCS believes there’s no better pairing for beer than baseball, this notion can still leave us hungering for more. So on this day of all days we can experiment and taste a barrelful of perfectly paired, if not unlikely brew-friendly fare. Pilsner and pizza?  A classic match.  English pale ale with fish and chips? The best of mates.  But this is a day when we can “foament” exciting and surprising possibilities with beer and food combinations. Whether comparing or contrasting, we come about these matchups not through formal data, analysis or objective facts, but simply what we personally enjoy.

Why not combine a creamy squash risotto with a mild amber lager, a cumin-spiced spit-roasted duck with Trappist ale, or an oatmeal stout with rich dark chocolate s’mores around a summer campfire. While the underwriters at the RCS home office look askance at endorsements, we can’t but help laud the beermeisters at Oskar Blues Brewery in Colorado. These crafters concocted Mama’s Little Yella Pils, a light, lemony sunshine hued brew, marvelously paired with thyme and lemon-basted grilled artichokes drizzled with honey vinegar and chive aioli.

A quote attributed to Ben Franklin claims “Beer is proof that God loves us and wants us to be happy.” The saying echoes the sentiments of the Beer-Bros who cooked up this annual homage to beer, beermakers and the human connections created while imbibing and celebrating all that beer has offered throughout millennia, confirming that, yes, everything tastes better with beer. An unexpected pairing, humanity itself, is found in a scene from the film “The Shawshank Redemption”. The setting unfolds in the backdrop of a scorching hot summer afternoon when a prisoner work crew gets a break from tarring the roof of a tin-plate factory. That day, through an ironic twist of team-building, the parched convicts are lavished with bottles of icy Bohemia style beer paired with blistering asphalt, a blazing sun and the hard-nosed “Screws”, the guards holding their menacing watch over the men who, after savoring their suds “… for just a brief moment, felt normal again”. Cheers to that. 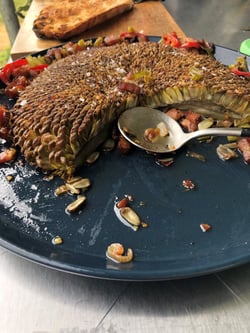